If I had to pick a favorite thing about Christmas, it would probably be the decorations. Not so much indoor decorations, I’m all about a house lit up like the Griswald’s, a drive through a park full of festive light displays, or shop windows all dressed up to entice holiday shoppers. I’ve already made my mind up that sooner or later I need to make a pilgrimage to NYC for Christmas so that I can annoy the locals as I block the sidewalk to gawk at all the amazing window displays in the department stores.

I‘ve got a bit of a history with Christmas window displays. In high school, my art teacher would pack all of the art students up to the mall and we would paint the huge windows with colorful images of wintery wonder and Christmas cheer. In 2018 and 2019, I helped my good friend Naomi decorate her shop windows for the downtown window display contest. Last year, we created a huge display depicting our fair home city of Charleston, WV. We tried to capture the feel of an old world Christmas card made with layers of cut paper. 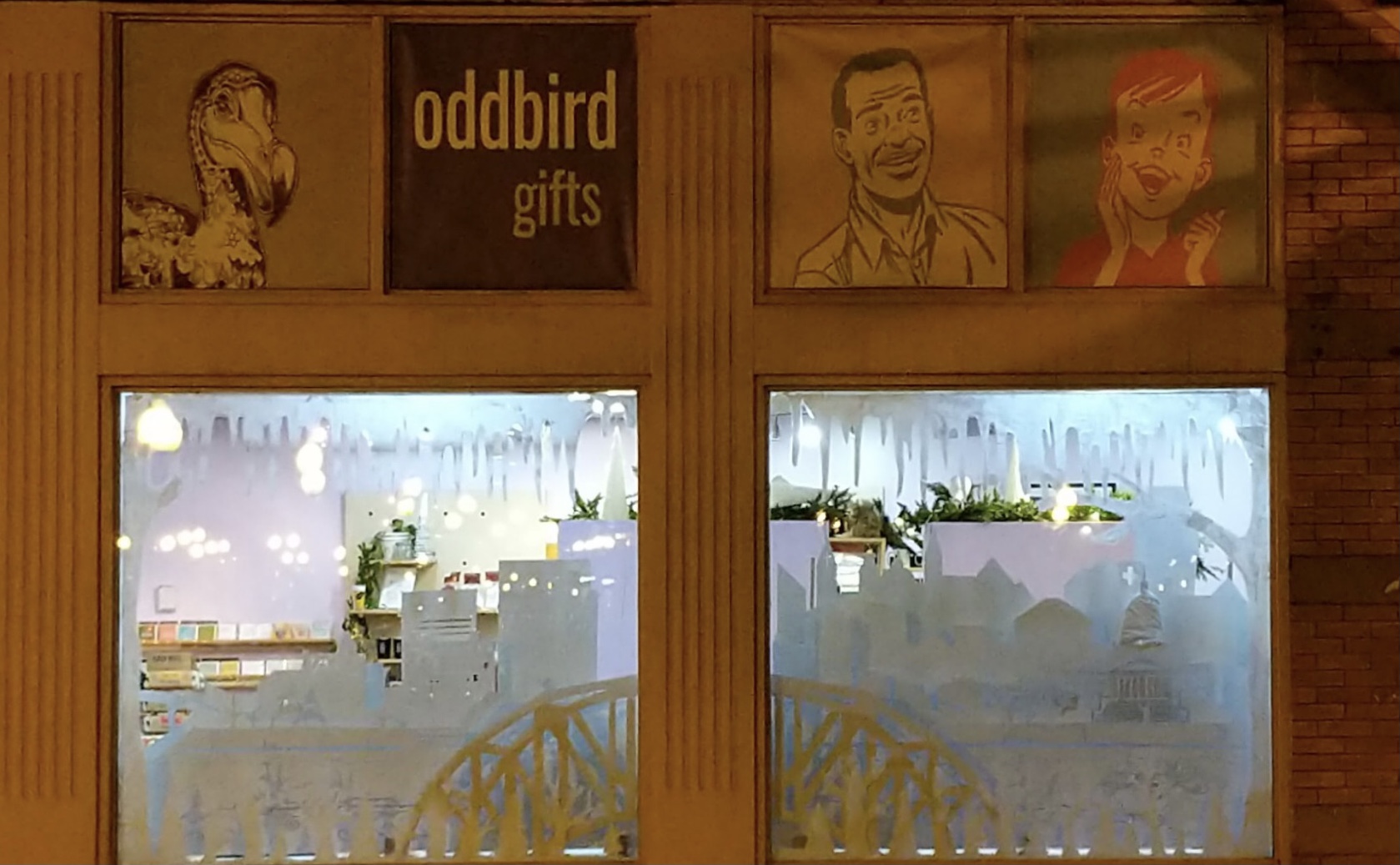 This year, I was so pleased to find out that the window display contest was extended beyond downtown and now includes all the commercial districts of town, meaning that our little shop in Elk City could enter!

My amazing boss Jeanne listened carefully to my various ideas for possible displays; but when we started talking about using the classic children’s picture book The Snowy Day by Ezra Jack Keats as our inspiration, I think we both knew we’d found an idea that truly reflected the spirit of Echo-Lit. The Snowy Day features Peter, an African American boy, who explores his neighborhood after the season’s first snowfall. Keats received the 1963 Caldecott Medal for his collage artwork, which made The Snowy Day the first picture book with an African American protagonist to win a major children’s award. There’s something so perfect about Keats’ simple illustrations - bright and colorful, layered and textural - they somehow capture the joy of the first big snowfall and the wonder of a child’s exploration. 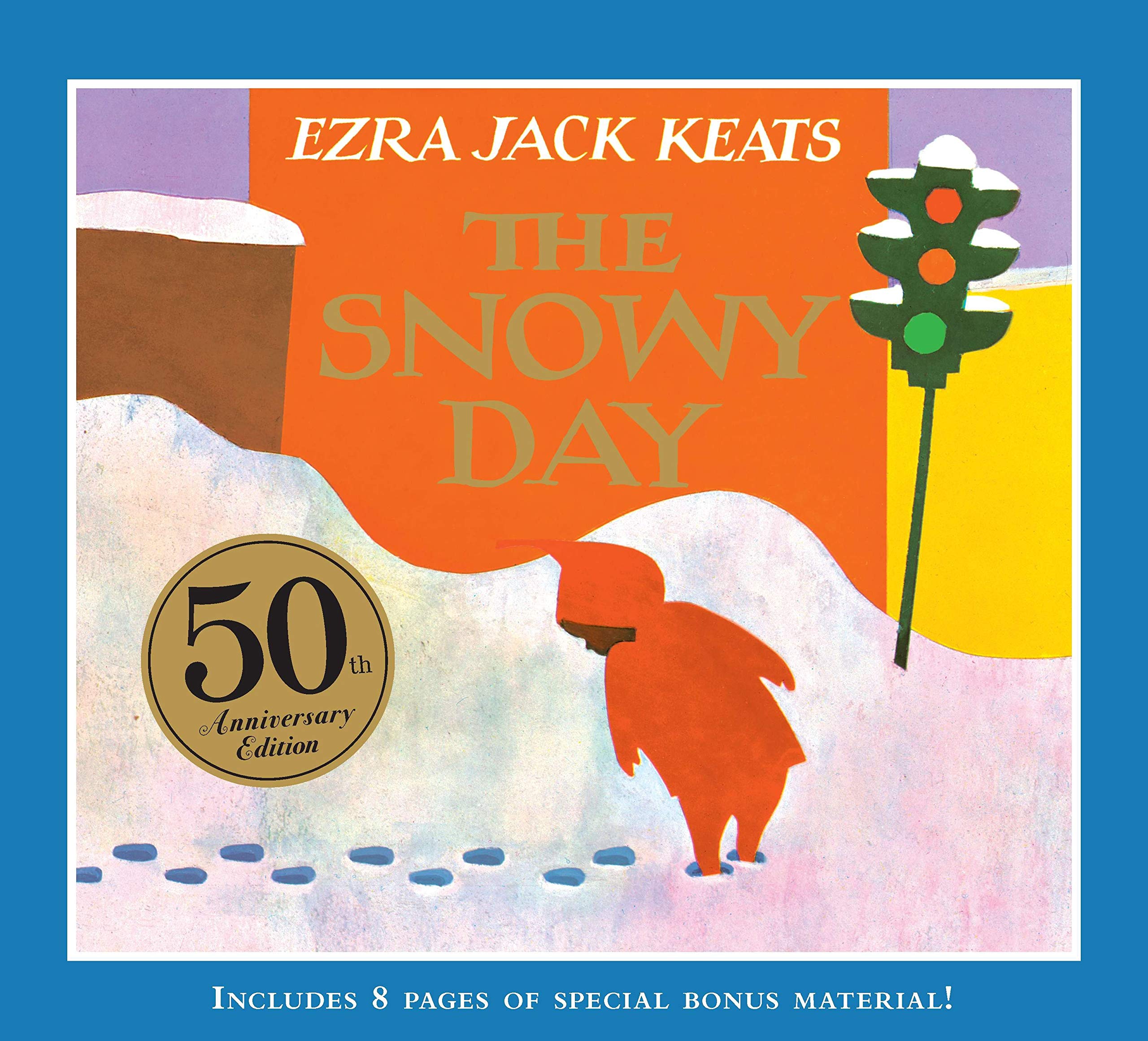 The next day, I started out by just looking through The Snowy Day, examining how Keats layered paper and fabric with pastel shading to create Peter’s day. We were most concerned with replicating the collage style for which Keats was so well known. This style is perfectly exemplified on the first two-page spread of the book as Peter awakens to discover a thick blanket of new fallen snow. For me, the most striking element of this spread is the bold, red, mid-century style wallpaper. After getting over the fabulous walls, I started examining each element of Peter and his bed. I adore the subtle fabric texture of his bedspread, and was enchanted by the block print floral pattern of Peter’s pajamas. I adore the shapes that comprise Peter’s bed frame, I imagine that was quite tricky to cut from paper; but intricate pieces like these generally just require patience and frequent changing of one’s craft knife blade. Outside Peter’s window, the snow-covered buildings are carefully torn pieces of paper.

To recreate Peter’s room, I spent a lot of time examining Keats’ illustrations and reproducing each of the elements. Cutting out the bed frames took some time, patience, and several fresh X-acto blades; but I’m pleased with the the results. I ended up substituting a Christmas-y flannel for the pjs when I couldn’t find a good match to the ones Peter is wearing in the book. I got major 80s flashbacks from the smell of the mounting adhesive spray, but I don’t think we suffered any adverse effects other than an afternoon dance party to some awesome pop tunes! This panel reproduction and all its layers involved a lot of mounting and cutting and a few minor burns from my handy dandy hot glue gun. 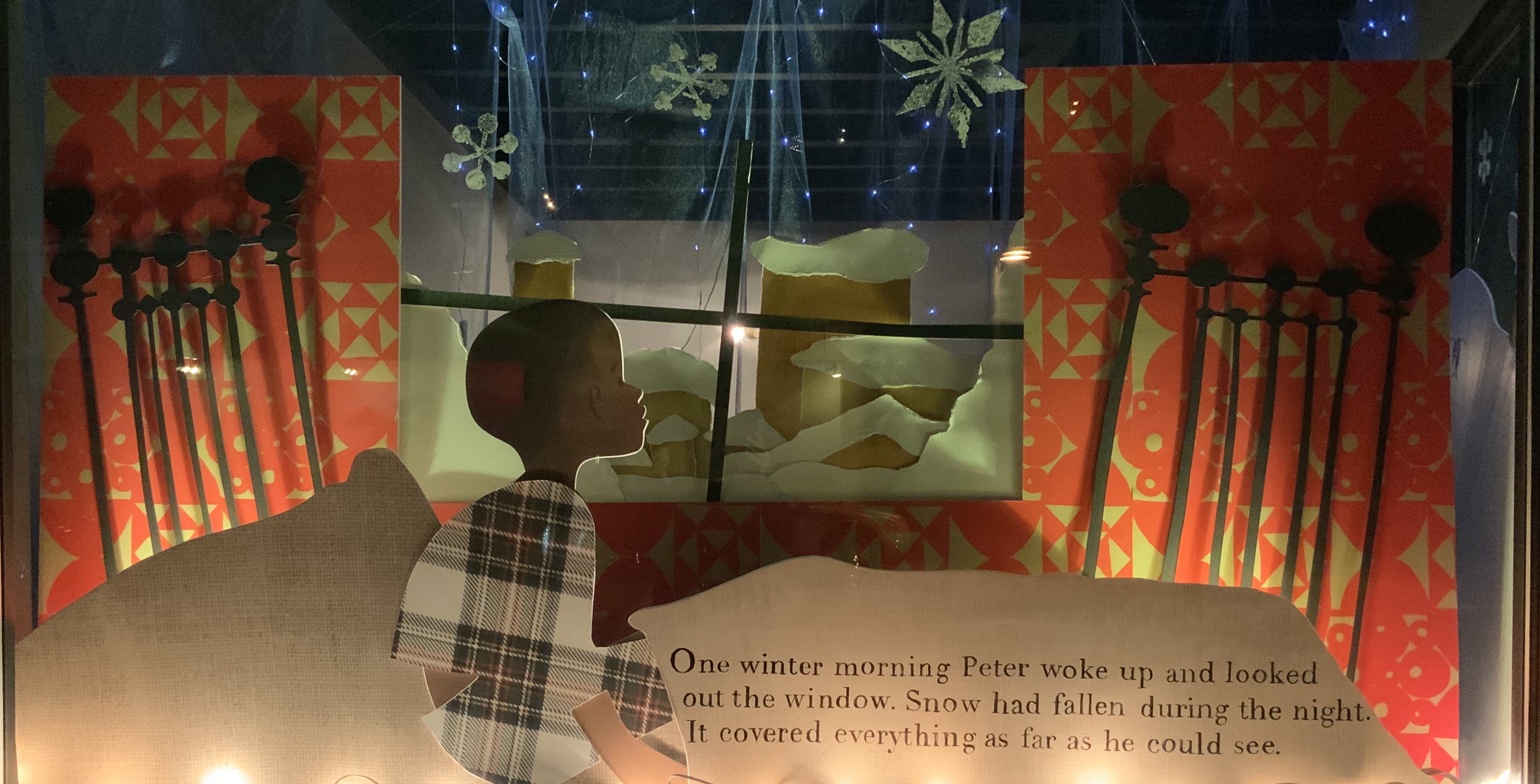 I tried to keep the remaining windows fairly simple, but I wanted to be sure to capture some of my favorite scenes from the book. I decided to stick to some of the more charming scenes of Peter playing and exploring his neighborhood. 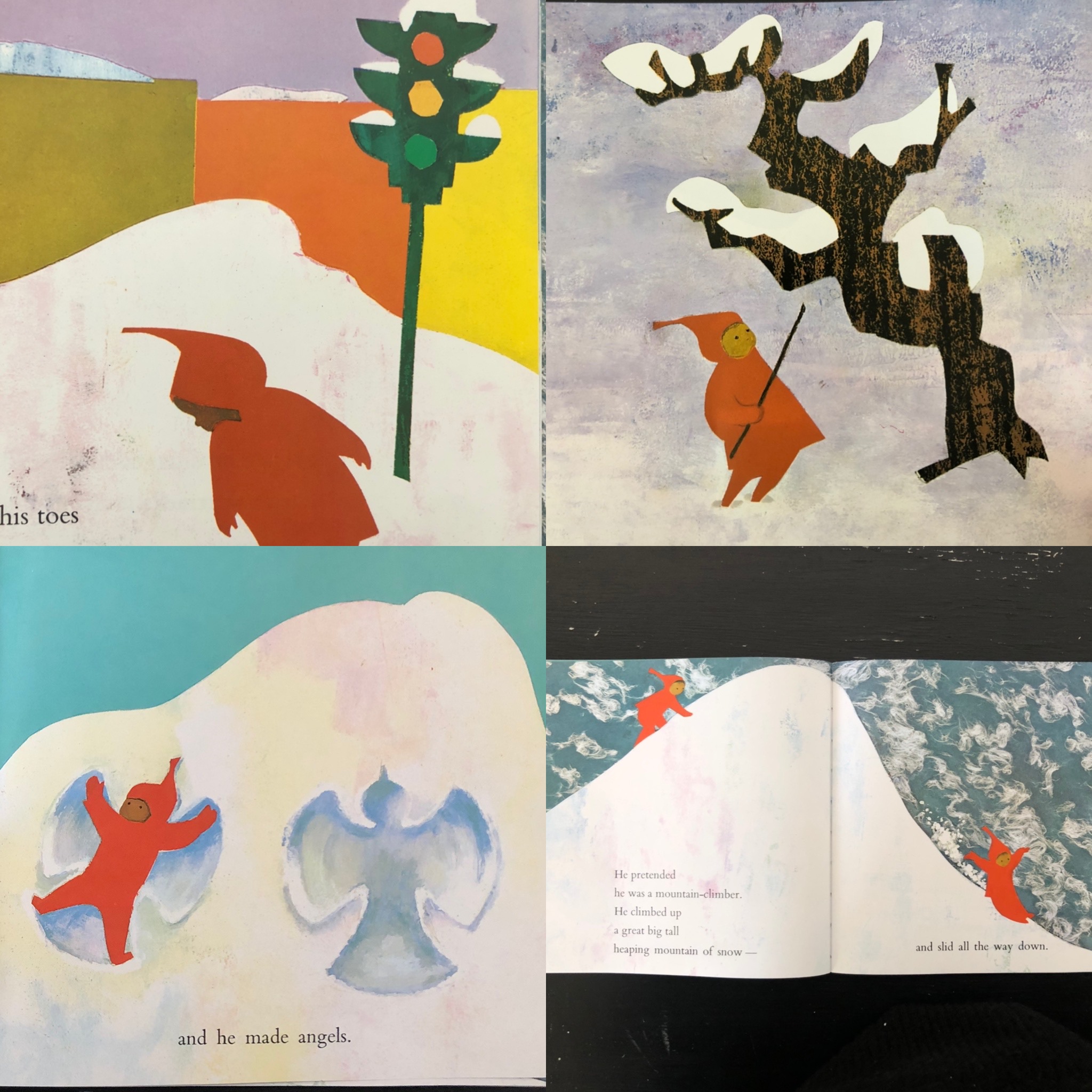 I had to do a little rearranging of the elements to make the display flow. I also ended up combining the scenes of Peter making snow angels and him sliding down the huge pile of snow. 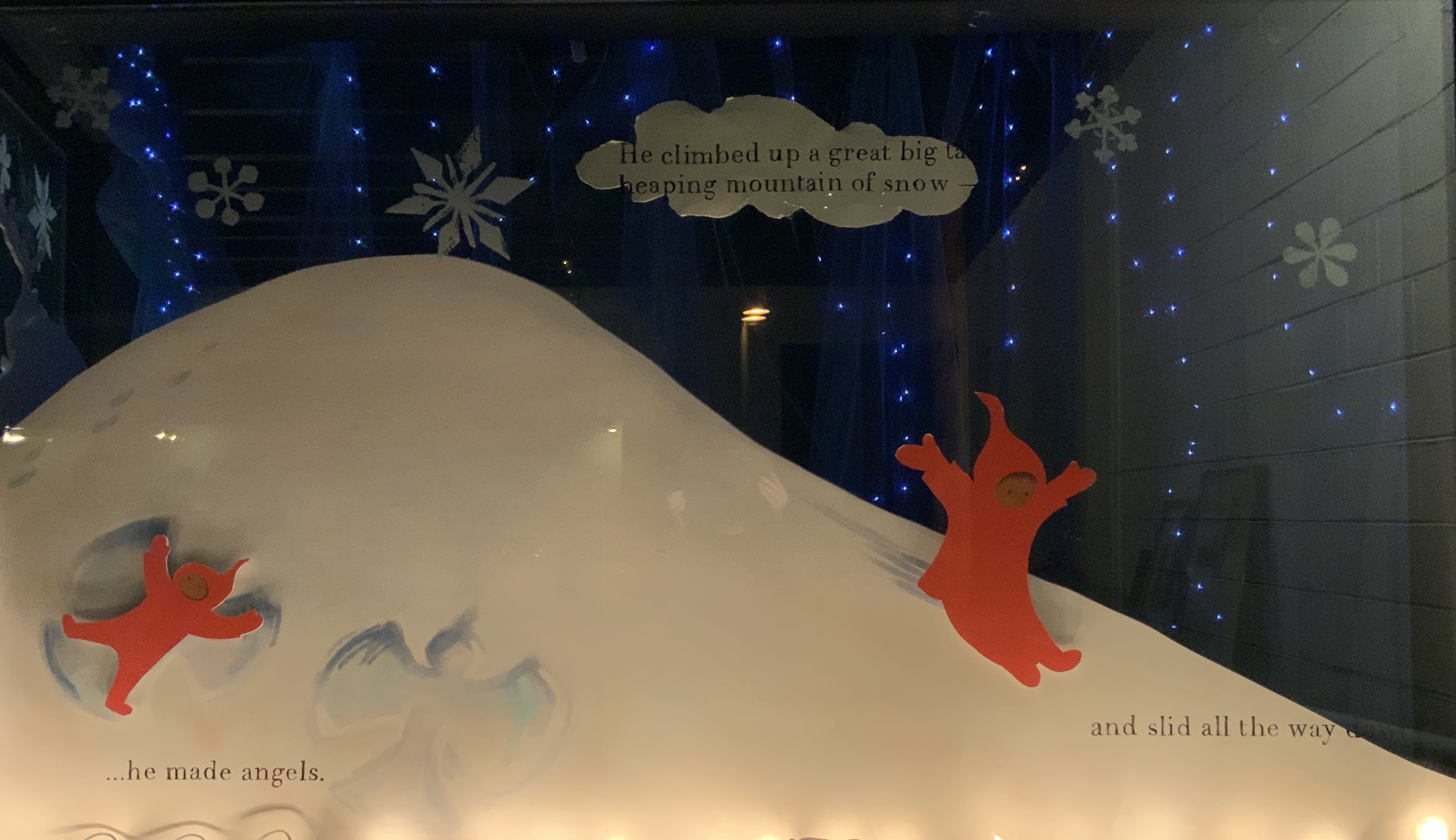 I thought it was important to include the text from the book itself. Rather than just print the text onto the images, I wanted to amp up the layered effect of the display, so I painted the text on to the inside of the glass in our windows. Throughout the book, there are lovely little snowflakes flying in the air - my best guess would be that Keats used some sort of stamp or Lino cut to make them. I replicated them by creating my own stencils and painting the snowflake shapes on to the windows. 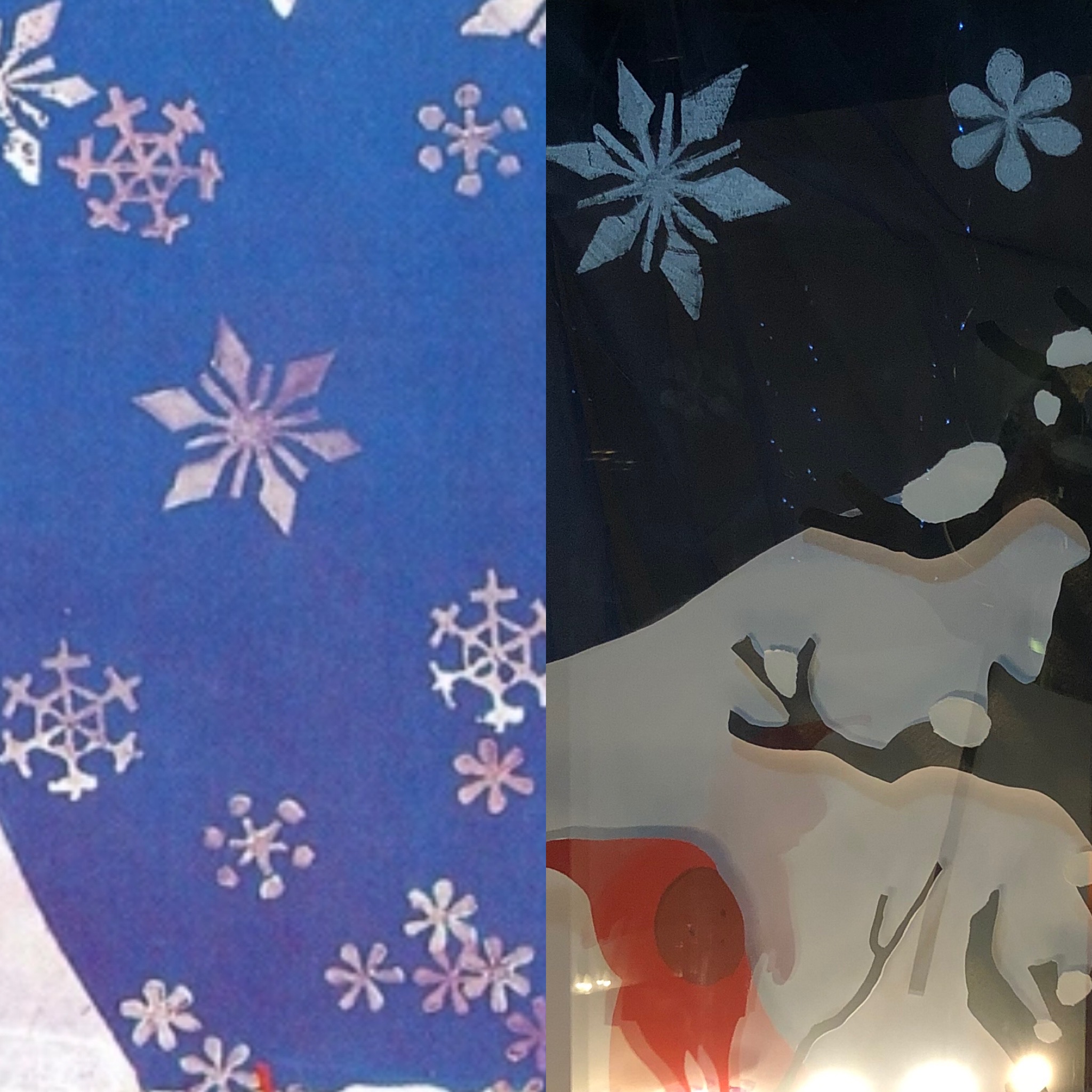 This project was a total labor of love. I feel like I’ve rambled on and on, so I think I’ll wrap up by sharing photos of the display and some details. Thank you so much for indulging me. 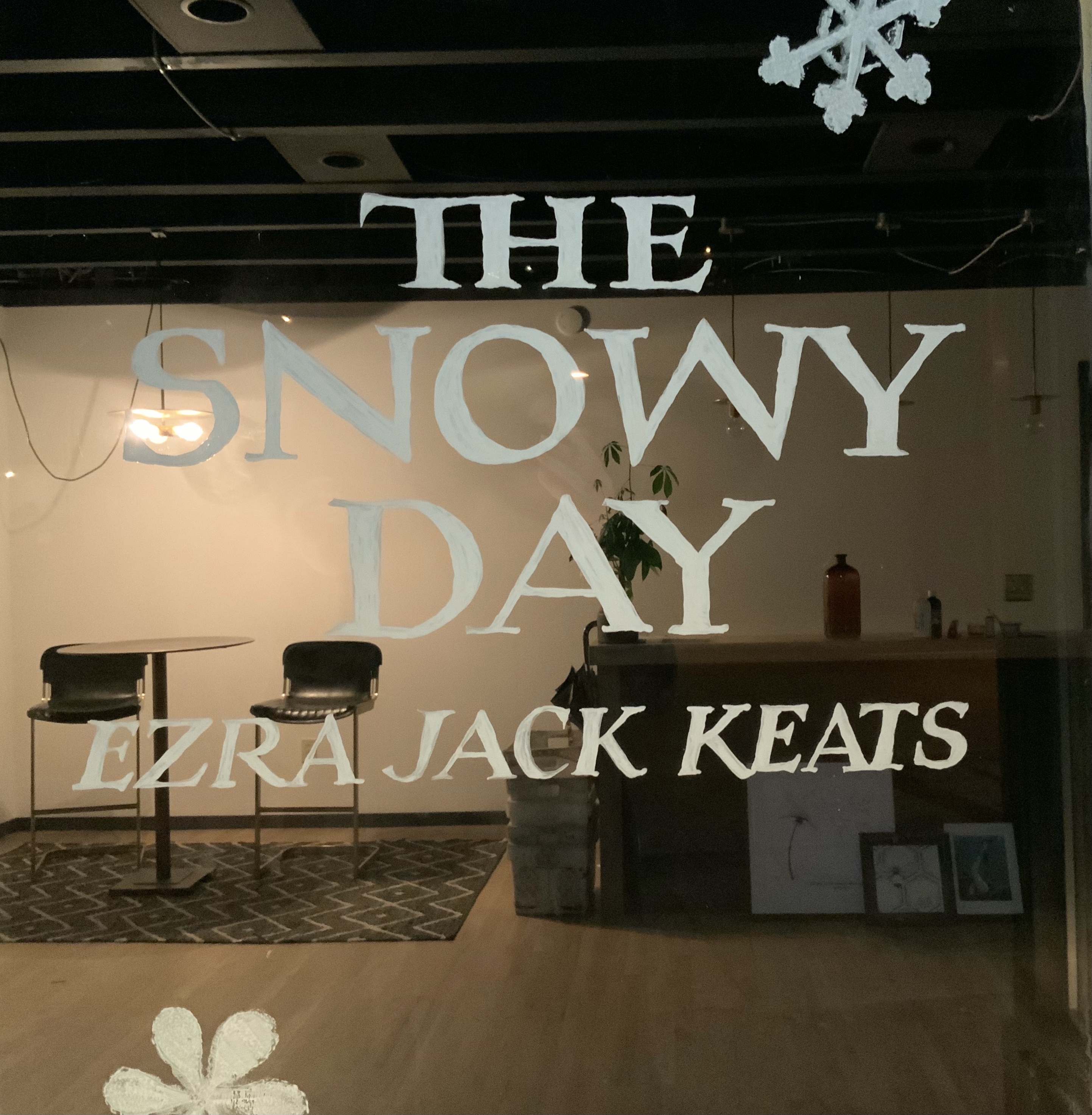 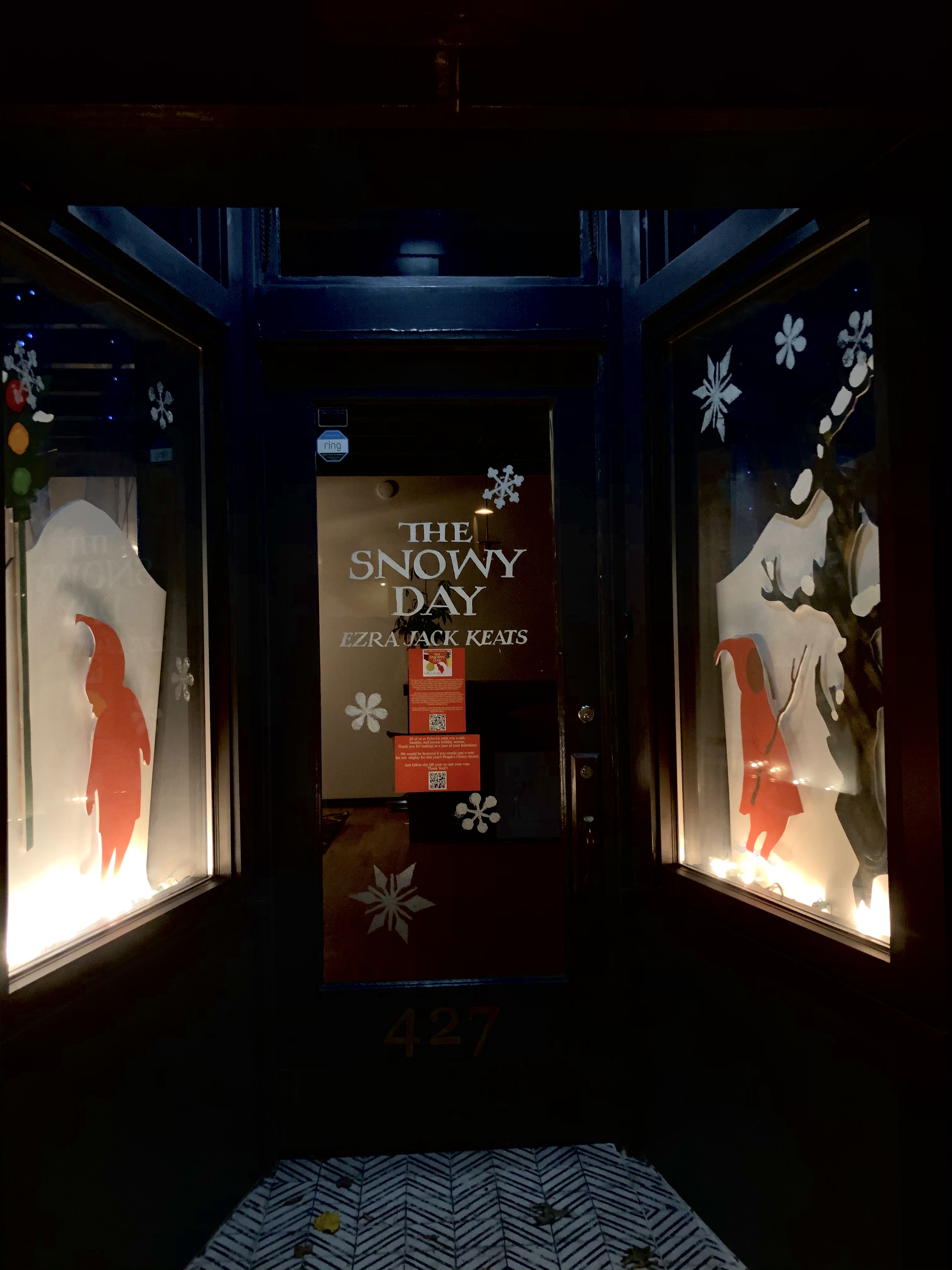 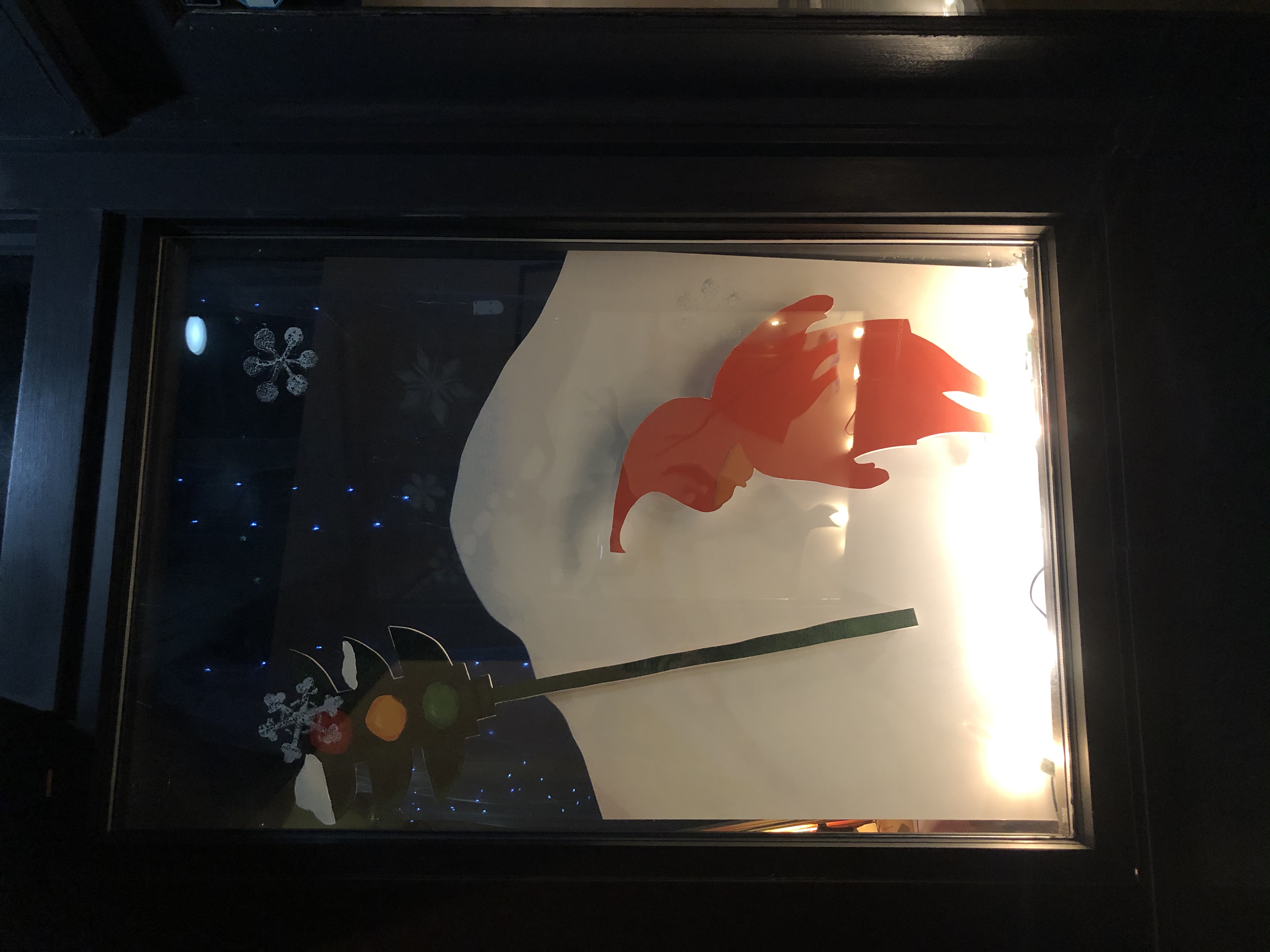 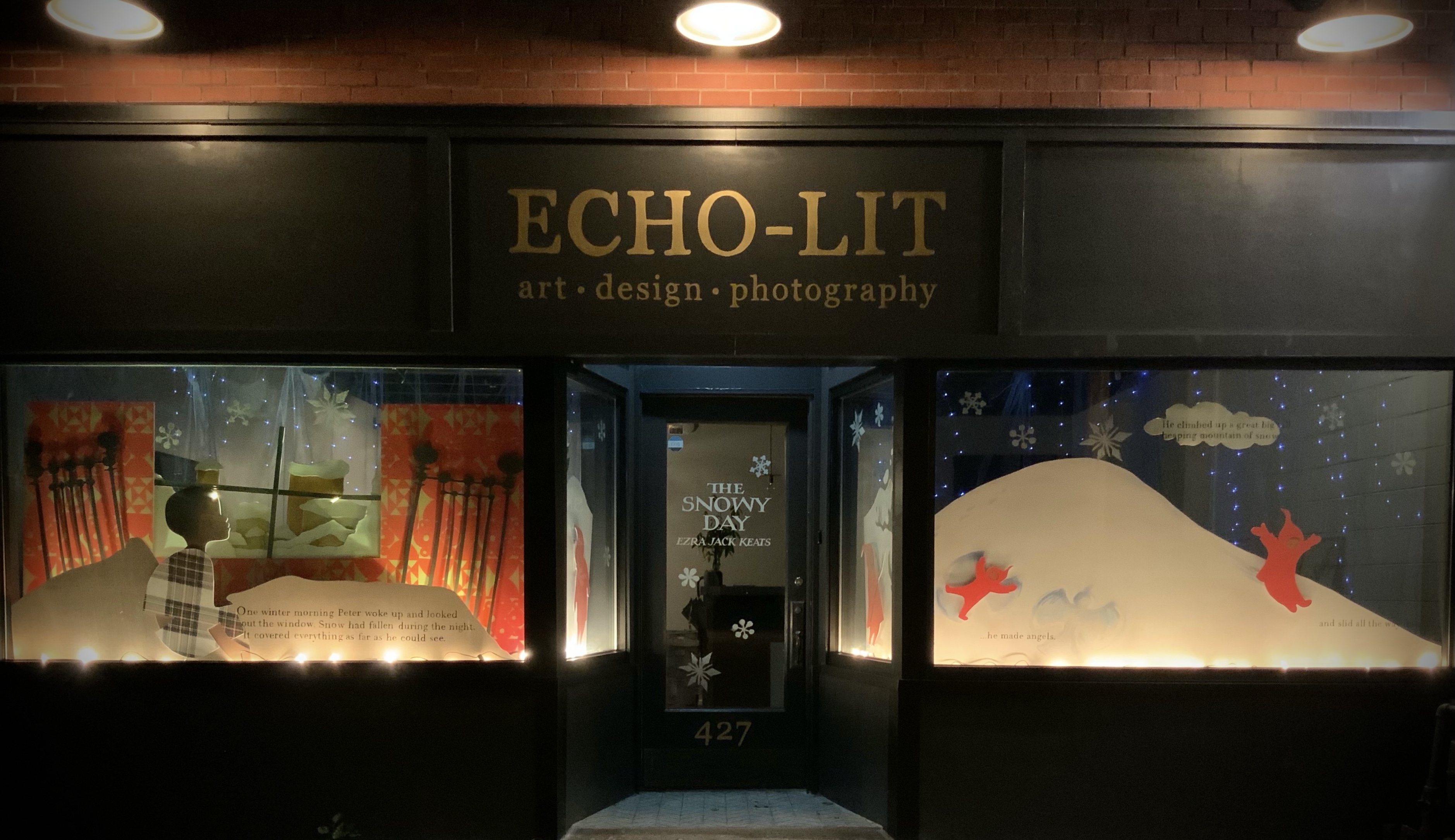 As I mentioned before, this was all to participate in our local window decorating contest. If you’d like to throw a vote our way, you can do so by following this link. We’re all the way at the bottom with the other West Side shops. THANK YOU!