Over the last few weeks racism and systemic oppression of BIPOC (Black, Indigenous People of Color) has gone from an issue that makes the papers every once in a while (which is unfortunately, all too often) to a daily front page issue in virtually every publication and website one might encounter. People are talking about race and racism on social media, in person, and across traditional media platforms. The world is having a conversation and I know some white folks are unsure how to join in meaningfully. Let me start our conversation by saying I am a white cis woman and I have no formal education in race or sociology. I do not want to confuse anyone into thinking I have any expertise in the matter at hand. I am speaking as a person who sees the injustice and pain in the world who wants to be and do better as a human being. It has occasionally been uncomfortable to have conversations centered on race; but discomfort is often necessary for personal growth. In my attempts to confront the ways in which I have learned and benefitted from bias I am trying to find resources that will teach me ways to both be a better ally and to become not just “not a racist” but truly antiracist. I hope that some of the materials and resources I share today might be of help to those of you looking for ways to be and do better.

As a little girl, my favorite doll was Barbie’s friend Christie; Christie was Barbie’s “black friend” (I can't even unpack the thinking behind having ONE Barbie doll with dark skin as late as 1982). She was my favorite because she had long, beautiful dark brown hair - the closest I’d seen at the toy store to my own dark brunette hair. She also reminded me of several of the girls at my grade school who had much prettier hair styles than the simple haircut my dad could manage and style for me as a single dad. As a little girl, the dolls I saw were mostly white and blonde. The picture books I read were populated by even more white faces. Even books that featured anthropomorphic animals seemed to represent white people. Diverse representation was not the standard of my late 70’s/early 80’s childhood despite the fact that from second to sixth grades my school was about 50/50 white/BIPOC. In 2014 Noah Berlatsky wrote in the Atlantic that “large numbers of kids don't see themselves reflected in the books they read, and non-white, or non-heterosexual, or even non-male children end up learning that they are marginal, or secondary, in their society.” Fortunately, publishers have realized that representation is important and there is an amazing variety of books featuring characters of every skin color. I think it’s important for BIPOC children to see themselves reflected in the pages of the books they read and for white children to see the beautiful rainbow of skin color that populates the world.

Parents and teachers of young children can begin sharing diversity and antiracist topics even with board books and ABC primers. “A is for Activist” is a simple alphabet book that uses familiar methods such as alliteration and rhyming while also introducing the concepts of diversity and social justice. Children can learn about diversity and inclusivity from the characters of Sesame Street in “We’re Different, We’re the Same.” Popular Sesame Street characters discuss their differences in appearance while showing young children that their needs and emotions are important, no matter what they look like.

I know many parents worry about what and how small children are absorbing and internalizing news about race, racism, and racial injustice. Two books for young children that deal with the issue of police officers killing black men are “Something Happened in Our Town” and “Not My Idea: A Book About Whiteness.” I found both of these books on recommended reading lists from a wide range of sources. One of my good friends has been reading “Something Happened in Our Town” with her five-year old; it has sparked some worries about his friends and classmates who don’t have white skin like his. That is obviously a difficult conversation to have with little ones, especially when at such a young age death is a difficult subject to conceptualize and many police officers are introduced as community helpers and heroes. My friend appreciated that the book includes a parent’s guide with sample dialogs and kid-friendly definitions for words and terms that might be unfamiliar to young children. “Not My Idea: A Story About Whiteness” is written specifically for parents to share with white children to introduce the basic ideology of antiracism. When children overhear troubling information, especially about race, it can be difficult to verbalize their anxiety; both these books can help open a dialog with young children about a difficult and important issue.

Racism and bias are reinforced when children are brought up without seeing the influence BIPOC have had on our world. Many children love biographies written for their reading level. The “Who Was ...?” series details major events in the lives of figures from literature, art, sports, politics and other facets of life. You should be able to find a variety of inspiring BIPOC biography regardless of your child’s interests. “Bedtime Inspirational Stories: 50 Amazing Black People Who Changed the World” can also spark a child’s interest in the stories of influential black lives. I was immediately drawn to Vashti Harrison’s illustrations when I saw her books “Little Leaders: Bold Women in Black History” and “Little Legends: Exceptional Men in Black History.” Not only are her books gorgeous to look at, they share stories of figures both lesser-known and iconic personalities meant to inform and inspire.

There has been a major surge in the number of titles published for young adult (YA) readers over the past fifteen to twenty years. In addition to fictional works such as “All American Boys,” “The Hate You Give,” “Genesis Begins Again” (“Genesis Begins Again” deals specifically with colorism and bias toward lighter skin tone over darker skin - even within BIPOC communities), and “Ghost Boys” there is an amazing range of non-fiction titles aimed at YA readers. Georgia Congressman John Lewis co-authored “March” a set of autobiographical graphic novels about his experiences in the Civil Rights Movement. “This Book is Anti-Racist: 20 Lessons on How to Wake Up, Take Action, and Do the Work” and “Stamped: Racism, Anti-racism, and You” are both aimed at readers 13-YA help them learn to be antiracist and to work to make society more just for everyone. Ibram X. Kendi -the author of “Stamped: Racism, Antiracism, and You” has written several books aimed at teaching antiracism for readers from infant to adult. Other titles by Kendi include “Antiracist Baby” and “How to be Antiracist.”

Memoirs have taken a prominent place in summer reading wish lists for several years now, and this year’s stack has been greatly influenced by current events. I’d love to learn more about Henry Louis Gates, Jr and Booker T. Washington, I’m intrigued by their lives especially since both share connection to my home state of West Virginia. I hope to read Gates’ “Colored People: A Memoir” and Washington’s “Up from Slavery.” I’m also intrigued by Margo Jefferson’s tale of growing up in the mid-century black bourgeoisie “Negroland.” Personally, I have enjoyed and can highly recommend Roxane Gay’s “Hunger” and “Bad Feminist.”

The only downside I have found to the recent increase in people’s desire to explore antiracism is that many of the books that have been labeled essential reading are hard to find readily available. “How to be Antiracist,” “White Fragility” by Robin Diangelo, and Ijeoma Oluo’s “So You Want to Talk About Race” have all soared up bestseller charts but are sold out through many major retailers and face loooong hold times through most library services. Before going to Amazon or other major retailers, consider reaching out to an independently owned black-owned book store. [LINK] If you can’t get your hands on a physical copy of your chosen titles, my best suggestion is to purchase difficult to find titles via e-reading apps or audiobook. If you do find yourself facing a wait for any of the books I’ve mentioned or just want something to give your reading brain a break, most of the digital video streaming services have curated collections of movies and documentaries about black lives - luckily, many of these titles are written and directed by BIPOC. Ava Duvernay’s documentary “13th” on Netflix and “Black Panther: Vanguard of the Revolution” on Amazon Prime have both provided some important context for today’s social climate. 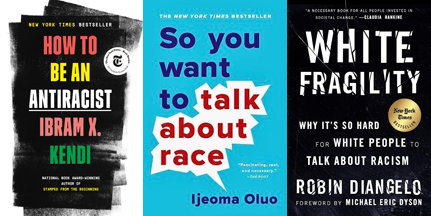 I hope you all understand that I am not trying to speak for or over BIPOC, that I hope to share information I have gained from conversations and research I have done. One of the secondary reasons I’m trying to consume so much information about race, social justice, and Anti-racism is that when media and entertainment companies see their products gaining popularity, they give more opportunity to BIPOC voices. Don’t forget that viewing black movies and reading black books supports actual humans - Netflix movies pay residuals; page views are monetized. Seek out your own ways to support black voices.